The 31st annual Kelly’s St. Patrick’s Day Parade returns Sunday, March 15 at 1 p.m. — and this year, it’s all about the animals.

The 2020 parade grand marshals are the Coastal Humane Society and “Pigman” Bill Shaver, who both work hard to benefit the region’s pets. Parade participants are asked to keep animals in mind when planning this year’s entries.

This past year, they undertook a special project and donated 65 state-of-the-art pet resuscitation kits to Dare County, Corolla, Corova and Ocracoke fire departments. 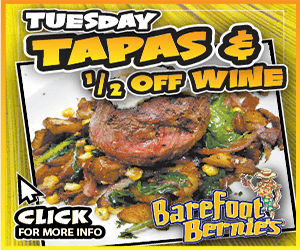 The animal-and-green themed parade route this year runs from Bladen Street at milepost 11.5 in Nags Head north to Driftwood Street on Beach Road.

An esteemed panel of judges will score entrants on the use of the parade theme in the following categories: Best Overall, Best Float, Best Unit and Best Band/Music group. Prizes will be awarded following the parade.

The annual St. Patrick’s Day parade, created by Kelly’s Restaurant owner Mike Kelly, began as a way to break up the winter doldrums and get the community ready for the summer season. Though Kelly’s restaurant has since closed, Mike Kelly has continued the tradition, with the parade now including more than 100 entrants and drawing up to 8,000 attendees. The parade is the largest St. Patrick’s Parade in North Carolina.

This year will be the Coastal Humane Society’s 24th Annual WalkaThon in Kelly’s St. Patrick Day Parade, a major fundraiser for the society.

“The Coastal Humane Society is always reaching out to help anytime owners and caretakers are facing financial difficulties with caring for their pets,” Mike Kelly said. “They do a tremendous job on this beach. They’re all volunteers; they work entirely on community donations. Twenty-four years is a long time and we’re happy to spotlight their work in this year’s parade.”

If your dog’s dream is to help others, then you belong in this year’s WalkaThon. Call 252-261-7417 to sign up or contact the society through Facebook or www.obxcoastalhumanesociety.org.