Hurricane Dorian regained major status Wednesday night as it continued its slow crawl just off the southeastern United States ahead of an interaction with the Outer Banks beginning late Thursday. 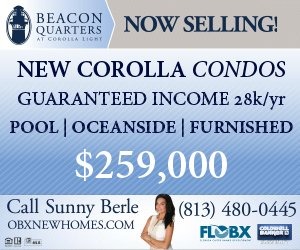 At 11 p.m., the National Hurricane Center said maximum sustained winds had again reached near 115 mph with higher gusts, placing Dorian a category 3 hurricane on the Saffir-Simpson Hurricane Wind Scale. Some fluctuations in intensity are expected during the next 12 hours, followed by slow weakening
Thursday through Friday.

Hurricane and storm surge warnings are in effect for the entire Outer Banks, as well as mainland Currituck and Hyde counties.

Storm surge inundation could begin as early as Thursday morning for coastal areas south of Cape Lookout, then expand north and into the sounds and rivers by Thursday afternoon.

For the Outer Banks, Dorian’s worst impacts will be late Thursday night into Friday morning.

The weather service says hurricane preparations should be completed no later than sunrise Thursday morning.